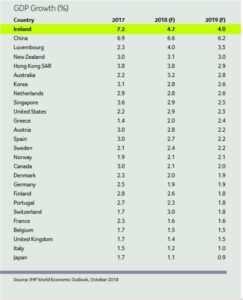 A young, well-educated and productive workforce

Ireland has the youngest population in Europe with a third of the population under 25 years old. The population is forecast to increase by almost one million people to 5.75 million by 2040.

Companies operating in Ireland have access to a labour pool of almost 250m people from across the EU.

​For companies who need to recruit talent from outside the EU, IDA Ireland works in close consultation with the relevant Irish authorities on securing employment permits and visas.

Companies can also avail of a streamlined employment permit applications under the Trusted Partner Initiative.

Cost of Living in Ireland

The cost of living in regional locations in Ireland compares exceptionally well to other competing cities, while Dublin ranks among the top 10 European cities for purchasing power