Ireland has one of the most advanced and competitive telecommunications infrastructures in Europe. The telecommunications market is fully deregulated and numerous companies have entered the market. Large investments in recent years have resulted in state-of-the-art optical networks with world-class national and international connectivity.

Energy infrastructure is a critical component in attracting business to Ireland. EirGrid controls the Irish national grid and the development of high voltage infrastructure to serve Ireland’s economy. It is currently developing a large number of major transmission projects that will boost Ireland’s already impressive network. Ireland is also taking a lead in promoting the sustainable energy sector.

The Irish coastline has an abundance of renewable energy, in the offshore wind and wave sectors. Ireland’s renewable energy strategy is focused on further developing the country’s sustainable energy infrastructure to benefit the economy.

Irish Water is Ireland’s new national water utility that is responsible for providing and developing water services throughout Ireland.

Irish Water’s remit includes bringing the water and wastewater services of the 34 Local Authorities together under one national service provider.

Transport 21 is the €34.4 billion national transport investment programme that is being implemented over the 10-year period from 2006-2015. This strategy has seen a rapid improvement in Ireland’s road and motorway network to promote sustainable national economic and employment growth while strengthening Ireland’s international competitiveness.

In the past decade, infrastructural improvements have been complemented by significant investments in rolling stock. As a result, Ireland’s rail network has the youngest intercity fleet in Europe. Service capacity and reliability have also much improved and passenger demand has responded, averaging a 4% per annum growth.

Ireland has extensive transport links to Europe and the rest of the world. Over 400 flights a week leave from Dublin, Cork and Shannon to London. US Pre-Clearance facilities at Dublin Airport and Shannon Airport are the only ones of their kind in Europe. New connections in 2019 include direct flights from Dublin to Montreal, Minneapolis and Stuttgart.

Irish ports offer transport services, facilities and maritime supply chain solutions to a number of industry sectors. Irish port traffic account for over 90% of imports and exports moved in and out of Ireland and facilitate an annual average of 4.5 million foot and car passengers over the past five years. Ireland’s three main ports are Shannon Foynes, Cork and Dublin which account for over 80% of total bulk volume. 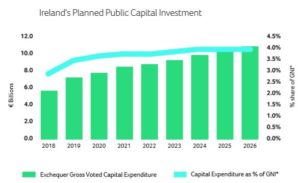