Ireland is readily accessible from any part of the United Kingdom. There are hundreds of daily flights as well as several ferry crossings. Ireland is served by international airports in Dublin Cork Shannon and Mayo as well as a number of smaller regional airports. The Dublin London Heathrow route alone is busiest areas in Europe with 14,390 flights a year. There are numerous daily flights to and from all major UK airports to the major Irish airports.

Flight times are typically an hour and 20 minutes from London to Dublin with a total flying time less than an hour. Flight times from Birmingham Manchester Bristol Liverpool are shorter. There is a great range of fares, many of them very modestly priced. It is easy to commute to Dublin or London for a whole working day with an abundance of early morning and early evening flights.

An enormous volume of goods crosses the Irish Sea in both directions on a daily basis. Dublin Port is the largest on the East Coast while Cork Rosslare and Waterford also handle substantial volumes of traffic. Approximately 500,000 freight vehicles pass through Dublin port alone annually going to and from the United Kingdom.

Ireland and the United Kingdom share a three hundred mile land border. Belfast is little more than an hour from Dublin by road. There is a high-quality rail connection. Both governments have promised to keep an open flowing border between Northern Ireland and the Republic of Ireland.

The continued availability of the Common Travel Area will make guarantee frictionless travel for Irish and UK nationals. 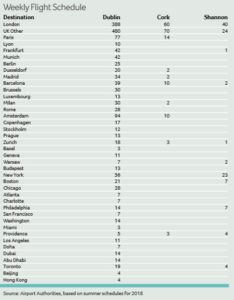 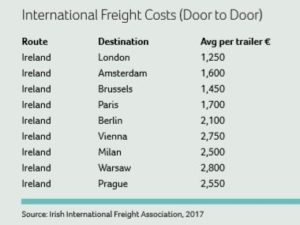